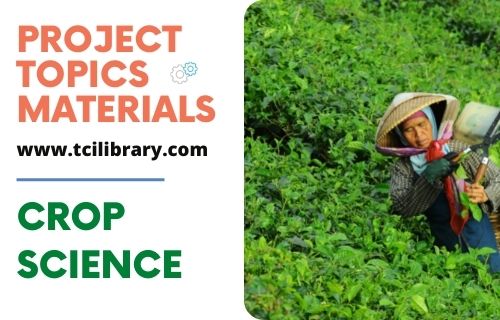 May 10, 2022 |  08:22 pm |  29
Project Topic On COWPEA (Vigna unguiculata (L.) Walp) SEED QUALITY AND YIELD AS INFLUENCED BY MANIPULATING SOWING DATES FOR THE MANAGEMENT OF SCAB INDUCED BY Elsinoe phaseoli Jenkins, AT SAMARU, NORTH-WEST NIGERIA.
INTRODUCTION
Cowpea (Vigna unguiculata, L Walp) is a leguminous crop indigenous to Africa and a dicotyledonous plant belonging to the family Fabaceae (Schippers, 2002). It can be grown as sole crop, but more often planted alongside crops such as sorghum, maize or millet  (Agbogidi,  2010a).  More  than  5.4  million  tonnes  of  cowpeas  are  produced worldwide,  with  Africa  being  the  highest  producer  with  nearly  5.3  million  tonnes annually (IITA, 2010).   Nigeria, as the largest producer and consumer of cowpea, accounts for 61 % of production in Africa and 58 % worldwide, out of which Nigeria produced 5.1 million tonnes under cultivation area of 3.59 million / ha (NAERLS & FDAE, 2013).
Cowpea is one of the oldest crops known to man and an important food legume because of its nutritional value to man and usefulness as fodder to livestock (Agbogidi, 2010b; Davis et al., 1991). Its ability to replenish soil nitrogen makes it  important  in the modern crop farming system in rotation with other crops (Langyintuo  et al., 2003). Also, its drought tolerance, relatively early maturity and nitrogen fixation characteristics fit very well to the tropical (humid) soils where moisture, erosion and low soil fertility is the major limiting factor in crop production (Hall, 2004). It serves as food security and at the same time can be combined with other recipe (Muoneke et al. 2012).
The average yields of cowpea are generally low (Benue State Agricultural and Rural Development  Authority (BNARDA,  2009).  This  can  be  attributed  to  many  factors amongst which are drought, low soil fertility, parasitic weeds, insect pests, and diseases (Olufajo and Singh, 2002; Niringiye et al., 2005; Fawole et al., 2006). The major insect pests of cowpea include: the legume pod borer, Maruca vitrata Fabricius; the coreid pod-bugs,  Clavigralla  tomentosicollis  Stal;  the  groundnut  aphid,  Aphis  craccivora Koch; and thrips, Megalurothrips sjostedti Trybom and Sericothrips occipitalis Hood (Jackai, 1995; Tanzubil, 2000; Malgwi and Onu, 2004). Opareke et al. (2000) estimated yield loss in cowpea due to insect pests to be above 80%. Cowpea is also attacked by parasitic flowering plants such as Striga gesnerioides which causes important yield losses of between 30-80% (Muleba et al., 1997); the nematode Meloidogyne spp causes cowpea root  knot (Sikora et al., 2005). The disease induced  by fungi and  bacteria include  cowpea  scab,  Elsinoe  phaseoli;  cowpea  wilt,  Fusarium  oxysporium  f.  sp. Lycopersici;  and  cowpea  bacterial  blight,  Xanthomonas  vignicola  among  others (Emechebe and Lagoke, 2002).
Scab, induced by Elsinoe phaseoli is a seed-borne disease that affects all above ground parts of the plant (leaves, petioles, stems, peduncles and pods) at all stages of growth (Emechebe, 1980; Iceduna, 1993; Mbong et al., 2010b), with yield losses of up to 80%
and even total crop destruction under severe conditions reported in Nigeria (Emechebe, 1980; Mungo et al., 1995). Low seed viability and vigour in plants have been attributed to seed-borne fungi (Elias et al., 2004); infected seeds may fail to germinate, or transmit disease to the seedling and to the growing plant (Fakir et al., 2002). Nabakka (1997) reported germination reduction of up to 59.3% on cowpea seeds which was as a result of seed-borne fungi infection; Mew et al. (1994) reported that the quality of seeds account for at least 5–20% increase in productivity.
1.1 Justification of the Study
Cowpea is an important grain legume in Nigeria (FAO, 2012) because it serves as cheap and rich source of protein, minerals, and vitamins in diets (Davis et al., 1991) and the fodder is also useful as feed to livestock (Agbogidi, 2010b). The potential yield has been estimated to be between 1,500 - 2,000 kg/ha, though average obtainable yield ranges between 200 – 400 kg/ha (Wakili, 2013). This is due to prevalence of abiotic and biotic factors which affect both yield and quality of the crop.
Scab, induced by Elsinoe phaseoli accounts for between 30% to 100% yield loss of the country’s  total  cowpea  crop  production  (Mungo,  1996  and  Mbong  et  al.,  2010b) through reduction in yield components such as number of seeds per pod and number of pods per plant (Tumwegamire et al., 1998). The disease has a puckering effect on leaf lamina, reducing the photosynthetic surface area of affected leaves (Tumwegamire et al., 1998). The most destructive phase is on the flowering axis causing flower and pod abortion or even completely preventing flower formation (Emechebe, 1980).
A most widely used method employed in the management of scab is application of mancozeb  (Dithane  M-45)  (Iceduna,  1993).  Excessive  and  indiscriminate  use  of fungicide  has  led  to  problems  of  resistance  build  up,  fungicide  residues,  and environmental hazards. This has necessitated the search for alternative control method (Narayanasamy, 2008; Gurjar et al., 2012). One of such method is manipulation of sowing date which determines the ability of crops to escape infection by pathogens (Cook  and  Baker,  1996).  Cowpeas  have  been  reported  to  escape  infection  by Cercospora leaf spot (Akande et al., 2012) due to manipulation of the sowing dates.
Seed quality is a crucial determining factor of yield and quality of crop production; it has a significant effect on seed germination and seedling vigour (Wimalasekera, 2015). Seed-borne pathogenic fungi can greatly affect seed quality and cause diseases that impact  seedling  production  and  yield  (El-Gali,  2015).  The  effect  of  seed-borne pathogens such as Macrophomina phaseolina on germination and seed vigour has been reported  by  Nabakka  (1997)  to  cause  59.3  %  germination  reduction  in  cowpea; however,  the  effect  of  Elsinoe  phaseoli  on  seed  quality  of  cowpea  has  not  been investigated.
The aim of this study is to relate the influence of sowing date on scab incidence and severity and provide farmers information on the possible date to sow in order to reduce scab infection and obtain high yield and good quality seed.
1.2 Objective of the Study
The objectives of this study are to:
I. Determine the effect of sowing dates on scab and yield of selected cowpea varieties.
II. Determine the effect of sowing dates and scab on seed quality of cowpea.

Previous←CONCRETIONARY NODULES AS NUTRIENTS SINKS AND THEIR EFFECT ON PHOSPHATE ADSORPTION IN A PLINTHIC HAPLUSTALF.
Next→DETERMINATION OF OPTIMUM TRYPTOPHAN AND CRUDE PROTEIN REQUIREMENTS OF BROILER CHICKENS REARED IN THE TROPICAL ENVIRONMENT 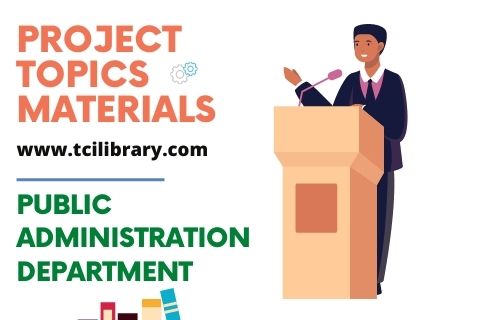