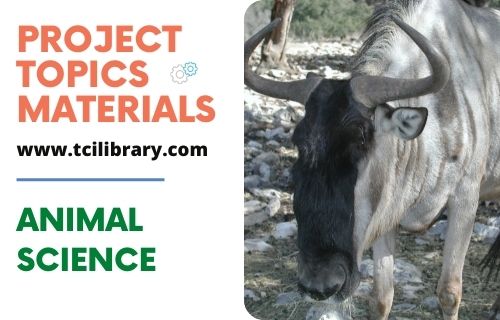 
Calves are the future producers of cow milk for human consumption, but depend solely on milk for their nutritional needs at the early stage of life. Milk is a unique food for calves and supplies a lot of nutrients essential for growth and organ development (Ghorbani et al., 2007). Post-natal feeding of dairy calves is very important for better health and growth especially in commercial as well as smallholder dairy farms (Khan et al., 2012). However, the indigenous breeds of cattle in Nigeria are naturally poor milk producers, as they do not produce enough milk for optimum sustainability of their calves talk less of having surplus for human consumption. This results in underfeeding or starvation of calves with a consequence of stunted growth and mortality. Shortage of nutrients especially during the early stages of life in calves reflects later in their whole life in terms of productive and reproductive performances (Roy et al., 2016). If suitable substitutes for milk are made available, the nutrition of infant pre-ruminants can be improved and survivability can be increased (Khan et al., 2012). The benefits of improved nutritional status of calves in the first 2 – 3 months of life may include reaching maturity age sooner, improved ability to withstand infectious challenges and increased subsequent milk production (Drackley, 1999).

Milk replacers (MR) are very good sources of liquid feed for calves (Roy et al., 2016). Khan et al. (2012) defined milk replacers as those feed ingredients or a mixture of such ingredients that can be used as substitute for whole milk in the diets of calves. They are made from by-products of milk with the addition of some other ingredients in such a way that the final product is comparable to whole milk. A typical MR comprises of skim milk powder, whey powder and vegetable oils. Crude protein content is usually 20%, and the fat content typically ranges from 15 to 22% (DM basis) (Mete et al.,2000).
In developed countries, alternatives to whole milk feeding to pre-ruminants are formulated using by-products of milk processing industry (Oliveira et al., 2015). Such practice is not feasible in a developing country like Nigeria where the demand for milk and milk products in human nutrition is constantly increasing as a result of the rapid increase in human population (ATA, 2013). The aim of using milk replacer is to cut down the cost of whole milk in calf rearing programme and to improve their performance (Mete et al.,2000). There are many types of low cost, high quality plant protein viz, soyflour, soymilk, soy protein concentrate and wheat protein which could be used in the formulation of milk replacers (Ghorbani et al., 2007). However, Roy et al. (2016) showed that soy protein is widely used in milk replacer formulations because of its high-quality protein content. Soybean contains up to 40% crude protein compared with 1.0 to 5.6% protein content of most animal milk
(Ghorbani et al., 2007) and has an acceptable amino acid profile (Gernah et al., 2013). Soymilk not only provides protein but is also a good source of carbohydrate, fat, vitamins and minerals (Nitsan et al., 2005).

Soymilk, a novel milk replacer has been used for artificial rearing of young animals (Ghorbani et al., 2007). Few studies indicated that feeding soymilk as milk replacer to calves resulted to increased growth performance when compared to whole milk feeding (Bartlett et al., 2006; Ghorbani et al., 2007; Masum et al., 2009; Roy et al., 2016). Despite soybean‟s pivotal role in animal nutrition, it cannot be fed unprocessed because there are some anti-nutritional factors (ANFs) which limits its utilization. These ANFs include: protease inhibitors, tannins, phytates, oxalates, saponins, etc. Fortunately, the levels of these ANFs can be eliminated or reduced through soaking, cooking, sprouting, fermentation, toasting, etc (Soetan and Oyewole, 2009). In additon, soaking could reduce ANFs such as protease enzyme inhibitor, phytates, etc due to their partial or total solubilization and removal with the discarded solution (Prodanov et al., 2004). However, in calves with completely functioning rumens, ANFs and complex proteins are not as detrimental, and thus processing is not as crucial (Liener, 1994).


Milk replacer is an ideal liquid feed for pre-ruminants. Commercial milk replacers are scarce and expensive because they are mostly imported. Soybean is readily available, less expensive and can be cultivated locally. Soybean has potential for use as milk replacer formulations because of its high nutritive value. Soybean is a good source of high quality, relatively inexpensive protein. Soybean protein is often used in calf milk replacers and starters instead of milk proteins because of its low cost and its essential amino acid content which is similar to cow‟s milk. Soymilk is cheaper than cow milk therefore, successful replacement of cow milk with soymilk may reduce feed cost. However, to ensure proper growth and health of the calf, processing and subsequent solubility of the protein source are crucially important for determining the suitability of alternative proteins in milk replacers. Soaking as a processing method could be employed to improve the feeding value of soymilk. Successful replacement of cow milk with processed soymilk could also improve the nutrition and survivability of calves. The technology can easily be adopted by farmers to enhance the survival of the calves and have excess milk for sale. The use of soymilk as an alternative protein source in milk replacers is therefore a very vital area to explore in calf nutritional research.


The broad objective of the study was to investigate the potentials of using soymilk as a replacement for cow milk in the diets of dairy calves. While the specific objectives were to evaluate:
1.    The effect of soaking duration on the nutritional and antinutritional composition of soybean (milk quality of soybean).
2.    The performance of Friesian x Bunaji calves fed different ratios of soymilk and cow milk.
3.    The economic advantage of feeding different ratios of soy:cow milk in Friesian x Bunaji calves.


This study was carried out on the following research questions:

Research Question 1: Does soaking duration have any effect on nutritional and anti- nutritional contents of soybean?

Research Question 2: Does feeding different ratios of soy:cow milk have any effect on performance of Friesian x Bunaji calves?

Research Question 3: Does feeding different ratios of soy:cow milk have any economic advantage?