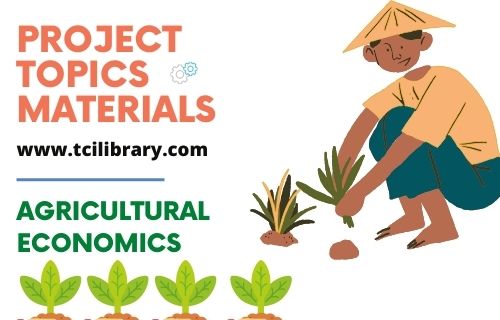 PROJECT TOPIC AND MATERIAL ON ECONOMIC ANALYSIS OF MILK PRODUCTION, PROCESSING AND MARKETING  IN KADUNA STATE

Agriculture plays a key role in the Nigerian economy, employing two thirds of the labour force and accounting for over 40% of the G.D.P (CBN, 1999). The livestock population comprises about 14 million cattle, 34 million goats, 22 million sheep and about 100million poultry (Yahuza, 2001).  Other livestock species of economic importance are donkeys, pigs and camels.   Cattle represent one of the most economically significant group within the livestock sub-sector.

The livestock sub-sector is dominated by traditional systems of production and marketing.  Transhumane pastoralists in the north of the country, rear a very high proportion of the cattle herd and many sheep and goats (Shu’aibu, 1999). Accurate statistics on livestock production and marketing are not available, to make detailed projections of the supply and demand of the livestock sub-sector. It is clear, however, that over the last two decades the supply of meat, milk and eggs have failed to keep pace with the increasing population (Yahuza, 2001).

Milk accounts for 16% of the total value of all food products from livestock in sub Saharan Africa, estimated at US $18.3 million in 1986 (FAO, 1986).  Despite this contribution,  sub  Saharan  Africa  has  failed  to  attain  self  sufficiency  in  dairy products.   This is particularly true in Nigeria where the growth in livestock

production has been insufficient to meet consumption level.

The supply of animal products has been declining over the past years, while demand has been increasing, as a result of increases in population, urbanization and income.  Consequently, Nigeria has become a net importer of livestock and livestock products. Recent statistics on the importation of dairy products in Nigeria are not easy to come by.   Restrictions placed on imports of animal products and other food stuffs in the 1980s, coupled with the introduction of the Structural Adjustment Programme (SAP), which saw a massive devaluation of the Nigerian currency, initially reduced the importation of meat and dairy products. According to

Danbaba (2001), for Nigeria the largest decline in imports occurred in 1982, which coincides with a substantial devaluation of the Naira.

1.1 Importance of Milk in Nigerian Diet

The livestock resource survey carried out by the Federal Department of Livestock and Pest Control Services in 1990, put the cattle population in Nigeria at 13.9 million (Resource Inventory Management - RIM, 1990).  13.5 million (96%) of

the cattle are in the hands of the pastoral Fulani.  This pastoral herd is the most important  domestic  source  of  milk  in  Nigeria. They  are  characterised  by

movement of their herds to the south during the dry season in search of feed and water and back to their base in the north during the wet season (Awogbade, 1981, Adesipe, 1986 and Isma’il, 1995).

Milk the "... most nutritious food known to man".  (Michael et al 1991) is important in the diet and culture of the Fulani.  Fresh, boiled or curdled, milk is consumed by the Fulani and by the rural and urban population.  The Fulani women monopolize the local dairy production in Nigeria, although they own only a few of the family's cattle (Adholla-Migot and Little 1980).  Pastoral women sell milk and cooked millet balls called Fura in Northern Nigeria and Southern part largely settled by the Hausawa.

locations such as markets in certain towns. The traditional system of production which is the single most important source of local dairy products is faced with problems of product wastage and deterioration in quality due to the scattered nature of the producers and the poor product handling equipments (Isma’il, 1995).

The federal government made several attempts in the past to reduce the problems of dairy production, by establishing dairy plants in different parts of the country. These dairy plants have cattle ranches close to them so that their raw materials for production can be obtained. Most of these dairy plants were closed down due to reduction in the availability of raw materials and their high cost of purchase (Danbaba, 2001).

Before independence in 1960, dairying in Nigeria was influenced by the colonial experience, which placed complete reliance on large government farms to meet the growing demands of the cities. Therefore, the then veterinary department set up a milk processing plant at Vom (near Jos) in 1939, originally to produce butter and later to produce cheese (walker 1981 and Yahuza 2001). A similar scheme was launched at Kano in 1940. After independence, as part of government’s strategy  to  encourage  the  development  of  the  dairy  industry,  several  dairy- processing plants were established throughout the country.  Among these were, Madara Limited in Jos, Plateau State, and Agege Dairy Farm, near Lagos. Other government dairy farms were established at Ibadan, Kaduna, Maiduguri, Minna, Ilorin and Kano.

The dairy industry represents an important component of the agricultural sector of the economy with great economic, nutritional and social implications (Olaloku, 1976 and Yahuza, 2001).   The industry provides a means of livelihood for a significant proportion of rural pastoral families in Nigeria. Through their production activities and marketing segments, dairy processing plants, provide employment and value added services to milk. Currently, however, very few of the 63 known milk processing plants are operating at more than 20% of their installed capacity (Yahuza, 2001; 2002). According to Nwoko (1986), Maiduguri dairy plant operates at 25%, Ilorin plant 10%, Nigeria dairy company Kaduna 18% and Madara limited Jos at 20% of their installed capacity. At present, the market has been taken over by "cottage" outfits that process and market yoghurt and other dairy products in urban areas, using milk powder as a raw material, despite the ban placed on imports by the government (Yahuza, 2001).

Therefore, the dairy industry is facing a serious challenge of meeting the daily nutritional requirement of Nigerians. The gap between supply and demand for dairy products is widening as a result of increase in population, per capita income and urbanization. Imports that used to bridge part of the gap have been declining. Consequently, local collection, processing and  marketing of milk is becoming increasingly competitive.

Despite  the  importance  of  pastoral  herd  in  the  provision  of  the  nutritional requirements of Nigerians, the pastoral milk production is still bedeviled with some problems. These problems make it difficult for local production to meet up with demand.  Output of milk from the national herd for the period between 2001 and 2003 was 515,291; 535,911 and 557,347 thousand tonnes; this by far is below the nutritional requirements of Nigerians (Yahuza, 2001).

There  is  a  need  for  research  to  identify  the  problems  associated  with  the smallholder milk production, which is the single most important source of domestic milk production in the country. This will go a long way towards solving our problem of insufficiency in dairy production.